Peer-based drug user organisations have been part of health promotion and health service landscapes since the 1960s. Despite this, a range of factors undermine the value of peer knowledge and experience in policy reform, including:

Using a systems-thinking approach, the W3 Project worked with peer organisations led by people who use drugs to describe their role in improving drug policy and health services. We also identified strengths, enablers, barriers, and implications of this kind of work.

This paper details the way that the influence of drug user organisations in the policy system is related to two factors:

However, a critical third factor emerges when you take into account non-peer actors in the system:

We found the influence of peer drug user organisations in the policy system is as much about the system valuing the participation of peers as it is about the quality of that peer participation.

If we are to achieve public health goals, such as the elimination of hepatitis C, policy and health services need to:

From the perspective of people who inject drugs…

This paper from the W3 Project, ‘Characterising the policy influence of peer-based drug user organisations in the context of hepatitis C elimination’, does more than simply ‘add to the evidence base’ in the rapidly expanding literature about hepatitis C treatment. In our collective (and humble) opinion, this is a ‘ground-breaking’ paper in the truest sense. The reason is, it gives voice to those who are largely silent in the much-heralded space of hepatitis C elimination: people who inject drugs and their representative organisations. In doing so, it advances their self-determination and agency.

Amidst the sometimes heated discussions regarding ‘who is a peer?’ and ‘when is enough “peerness” – enough “peerness”?’, this paper attempts (perhaps for the first time) to take us into some genuinely new territory. In doing so, it steers us away from tired, circular arguments and definitions about ‘who is a peer?’ These arguments may have good intentions in seeking to bind us in our ‘peerness’. In truth, though, they too often just end up limiting and confounding us.

Rather, this paper gives structure to the ‘doing’ of representing the needs, issues, and rights of people who inject drugs. It clearly positions peer-based drug user organisations in the policy system. It shows us how ensuring that this system is open and responsive also ensures access to hepatitis C treatment for as many individuals as possible.

A roadmap of sorts

This paper provides a roadmap of sorts for articulating and promulgating the where, when, why, and the how-to, in the overall elimination strategy for hepatitis C in Australia. It’s a combination of the pragmatic and the theoretical. Really, it’s a tell-all expose of just how important peer influence and peer expertise is when it comes to addressing the health and human rights of people who inject/use drugs. The paper is succinct in describing the Australian PWID/PWUD peer context, from its history and development to the current situation. Importantly, the paper positions peer skill as the ‘extra ingredient’ vital to HCV prevention, testing, treatment, and elimination.

The truth of the matter is, in the context of hepatitis C, peer work is too often undervalued and misunderstood. Unfortunately, this holds true not just in the past, but in the present as well. But, due to recent developments, we are far better equipped now than ever before to improve and scale up access to HCV treatment. The opportunity for individual health gains with the offer of DAAs is right here, right now.

Peer skill in the context of hepatitis C

We will only realise the full benefit of these developments, however, if the system recognises and openly acknowledges the critical place of ‘peer skill’ and peer-based approaches. Perhaps most importantly of all, the system must understand that, in this context, peer skill derives from current immersion in, and connection to, the community of people who inject drugs. It is through this connection that peers derive both their status as ‘peers’ and their knowledge of what needs to be done now.

Thus, a ‘peer’ is not merely someone who has had hep C in the past or has received successful treatment with DAAs. The reason is, people who inject drugs in Australia either have hep C, had hep C, or are personally connected to someone who has hep C. It is not a ‘past’ thing. It’s a ‘present’ thing… An ever-present thing.

People who inject drugs are forced into a hidden world — a world in-between, traversing the illegal and disconnected due to the ongoing impact of discrimination and criminalisation. Knowing who to trust and who to avoid, they identify each other through rite of passage, word-of-mouth.

Too often and for too long, we have spoken in euphemisms. Terms like ‘people affected by hep C’ or ‘sub-groups of people with hep C’ obscure (or try to obscure) reality. Representing the needs of a highly criminalised, marginalised, and relentlessly stigmatised group in the community is not an easy job. A lack of plain speaking does not help this situation.

Despite all this, peer-based drug-user organisations in Australia have been connecting successfully with their community for 3 decades and counting. As this paper demonstrates, they constantly strive for change and fight to maintain their place in decision-making arenas. They make visible the invisible and voice their outright opposition to shoddy thinking. But it remains difficult. ‘Difficult’ does not mean ‘impossible’, though.

One of the key benefits of the W3 Framework is the way it provides signposts and encouragement for all ‘system players’ to utilise every opportunity and to think and act with purpose, understanding, and direction. With this paper, each organisation or individual within the broader ‘system’ can see what they need to do, listen to those they need to listen to, and act in the way they need to act — if they choose to do so…

Anything less means missing out on the (globally) unique opportunity afforded to us by universal access to HCV treatment — regardless of someone’s social or individual circumstances, how they acquired hep C, or the severity of its progression — and on elimination as the goal.

Come one, come all!

HCV elimination is possible but only if we fund properly, trust fundamentally, and focus our efforts on peer approaches. We must embed strategies in the needs of people who inject drugs and driven by their representative, peer-based organisations.

This guest post was previously published on the original W3 Project website in July 2019. It was most recently edited and updated in June 2021.

Other posts in our written publications series

The posts in this series take some of our most important written publications and talk about them in plain English. 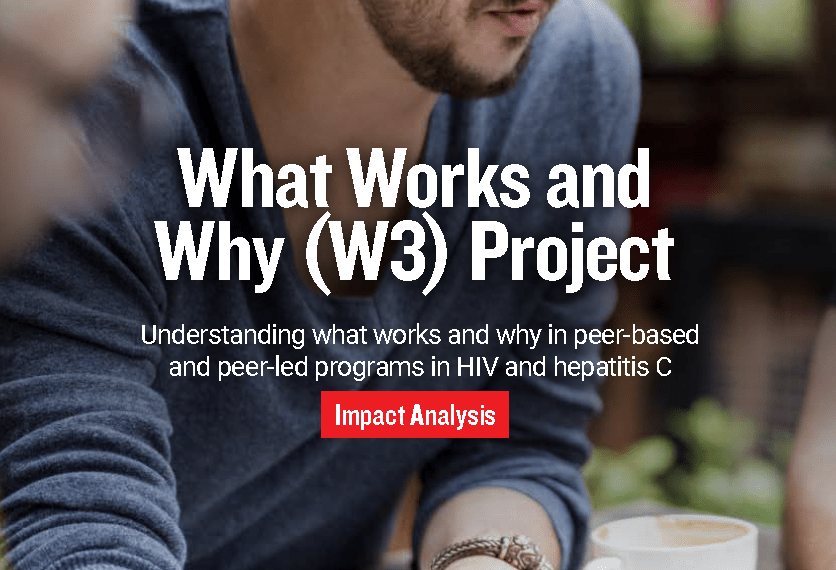